The Electrification of Classic Cars- Is it the Future?

In August a report by Systra, of one of the world’s leading consultants in the public transportation and mobility arena, highlighted two contrasting views which became apparent from their research into the effect of behavioural change as a result of COVID-19.

The report titled “Climate change still high on the agenda” found that 73% of respondents believe that climate change is a high priority that needs addressing. Despite this, 72% of respondents predicted a decline in their use of public transportation and instead were expected to increase their use of cars. If this happens, Systra states, then 17% of public transport journeys would be replaced by car journeys.

In a situation where there is a demand for private car use, but also a concern about the environmental impact of doing so, the obvious choice is to turn to electric cars.

The environmental credentials of electric cars are not without challenges; the cleanliness of the energy used to charge them can be up for debate. It’s one thing to own an electric car in California and charge it from solar panels, and another to run one in China where in 2019 58% of the country’s power came from coal. Electric cars effectively powered by coal are simply shifting the emissions from the “exhaust pipe” to the power station. Additionally, the weight of electric cars and the energy required to build them have also been challenged. Surely then, the answer lies in creating a sustainable solution – and the electrification of classic cars appears to fit the bill.

It could be argued that electrifying a classic car is the epitome of environmentally friendly motoring. The energy and resources that have gone into making a car 30, 40 or 50 years ago are by now fully amortised and by combining this body with a modern battery pack, which is often salvaged from a damaged electric car, surely offers the most sustainable solution for private transportation?

Classic electric conversion specialists Electrogenic make another case for electric conversion – an increase in reliability. One of their demonstrators, a Triumph Stag, was recently on display at Bicester Heritage as part of the Scramble event. The car was originally fitted with the Triumph 3.0 V8, an engine that it is fair to say had challenges with reliability in the period. With an electric power source in its place, the result is arguably more reliable than the product as originally designed. In any case, the Triumph V8 was often removed and swapped for a Rover V8 anyway – electrification is just a different type of non-original.

It’s not just a relatively run-of-the-mill being converted to electric (no offence to Stag owners). Electric Classic Cars have converted a Ferrari 308 GTSi, Everrati have launched their Porsche 964 demonstrator, and Lunaz, whose fully converted and restored cars reportedly start at £350,000, have electrified a Rolls-Royce Phantom V.

For some, taking out an air-cooled Porsche engine and swapping it for a battery is sacrilege, but for others, it provides the best of both worlds enabling them to take the character, design, and ownership experience of a classic 911 and wrap it into a package that has fewer emissions at source, has less to go wrong and is future-proofed against any potential anti-ICE legislation.

Whatever one’s views are on conversions, in addition to environmental aspects we have to also have one eye on the future. How do we ensure that there are people taking on the stewardship of historic cars for those that follow? From what we are seeing in the marketplace there is already a supply and demand issue emerging between those elderly owners of pre-war cars who are wishing to hang up their driving gloves and an apparent lack of future generations interested in buying an 80 year old car.

A small part of Generation Z, born in the late 1990s through to the early 2010s, and all of those in Generation Alpha who follow them will learn to drive in an environment where the only new car one can buy is electric. Not only will they potentially not drive something with an engine, but it also won’t have a clutch either. So, how can we pass on the custody of the cars which we cherish when the generations that are to inherit them can’t drive them?

Instead of viewing the electrification of classic cars as something that is wrong, as an industry we should take the view that anything that future-proofs classic cars, helps to engage with the future generations of owners and ensures continuity of ownership is something that should be celebrated. 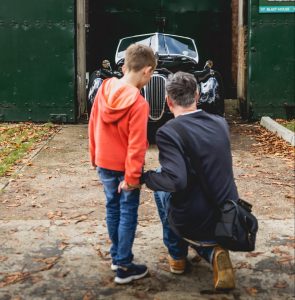