2016 has seen a broad continuation of the trends of 2015 rather than any significant change – so much so that this year’s retrospective has almost been a copy and paste exercise.

The year has finished strongly after what could have been seen as a bit of a slow start at the Arizona and Paris auction bonanzas. Monterey Car Week didn’t deliver quite the same headlines as in previous years but did anyone really expect it to? In the UK the year has ended on a high for many dealers and auction houses in the last quarter – so that means buyers as well. 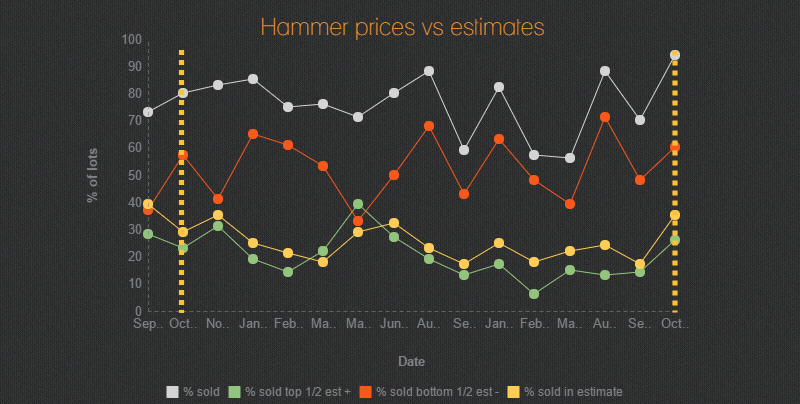 Auction performance has picked up after a bit of a lull. (Selected results shown for Bonhams)

From our perspective enquiries have increased significantly, transactions numbers have increased but we have seen the number of deals on higher value cars stabilise – and this is reflected in the market in general.

But the really big question is – how did we do with our predictions for 2016?

2016 Prediction: The right cars from these marques will continue to sell well but the market for average cars has softened – and there are plenty of average cars out there. Limited production Porsche were flying earlier in the year but the feeding frenzy seems to have eased. Enthusiasts are now looking for alternatives to these two dominant marques.

Result: Mainly correct – 911s started the year a bit slowly but have had a strong finish in 2016.

2016 Prediction: In 2015 we saw classic car market indexes on something of a roller coaster ride – the Scottsdale auctions saw many cars sell below estimate and many assumed that the market was heading for a slowdown. That turned out not to be the case and the market continued to grow but it certainly saw some ups and downs. The market is more unpredictable than it was 12 months ago – predictably so….

2016 Prediction: While stock levels will no doubt remain high, we don’t believe that we will see as many new and exciting cars coming to market in 2016. We’ll leave it to the auction houses to prove us wrong.

Result: kind of correct – the auction houses worked really hard at offering the unique and unusual because that is what the market was demanding. The volumes definitely reduced but the hype made it feel like they hadn’t. Dealers now have a significant challenge in finding the best stock.

2016 Prediction: The industry seems to be pretty happy with where prices are at the moment with no particular worries over falling prices. There might be a few more bargains out there in 2016, but if you are a classic car owner we believe you should be confident that your car’s value will remain healthy – provided you bought it right.

Result: Correct overall – the best cars continue to appreciate. Growth in some segments has slowed.

2016 Prediction: Manufacturers will begin to ramp up their involvement and investment in the classic car scene to support new car sales. This will be good for the hobby but may have have an impact on restorers.

Trends in the 2016 classic car market 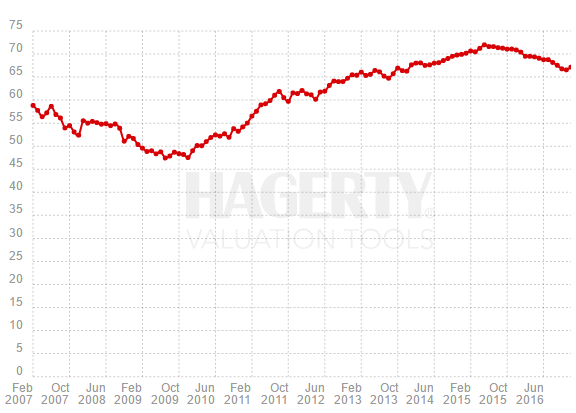 The Best Of The Best

The very best cars – of any marque – remain sought after and continue to appreciate. As mentioned by John Mayhead of Hagerty on our classic car market expert panel, quality has often been more important than marque in 2016. The most original, best condition, lowest mileage cars of any marque are extremely sought after and low mileage, manual supercars of the 90’s and 2000’s have seen significant growth in prices. RM Sotheby’s London sale was testament to this.

The “new” (or next – whichever way you prefer to see it) generation of buyers are shaping the market as cars from the 50’s and 60’s begin to make way for their younger brethren. Buyers are diversifying into marques other than the established players such as Porsche and Ferrari. Aston Martins of this era have performed well with the showroom appeal of  90’s V8 Vantage and Virage continuing to grow and limited numbers always help. No conversation about iconic cars of the 90’s is complete without talk of the Lancia Delta Integrale – values of the bread and butter varieties have been creeping up but many still believe they are undervalued. Perhaps they will take Subaru Impreza Turbos with them – after all, they have legions of fans and a cast-iron place in the Motorsport Hall Of Fame.

Aston Martin Vantage V600 have been catching buyers’ attention in 2016.

Cars under £100,000 and particularly under £50,000 have had a great year. Collectors are undeniably active in this area looking for cars that they can drive and enjoy which might also appreciate. Cars with a tangible motorsport connection remain sought after – Ford RS products are a good example of a car that we have seen a significant rise of interest in so why shouldn’t the humble Impreza appreciate for the same reasons. Healeys remain popular with our customers and we have seen a growth in interest in Jaguar XK150 – another affordable, eminently usable classic (depending on the model). 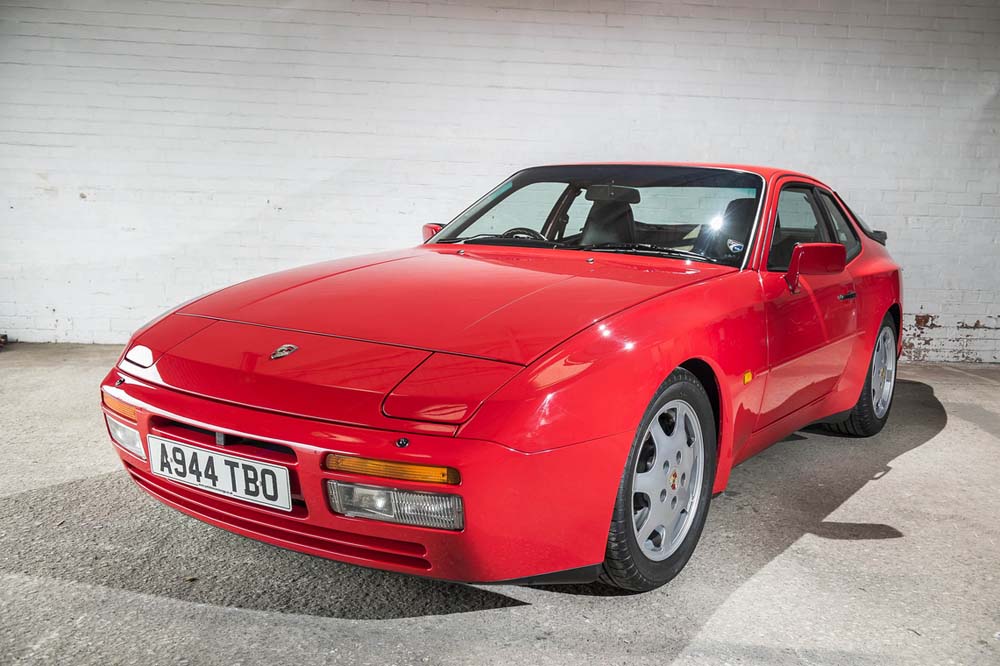 Most likely a good long term buy for the new owner. Silverstone Auctions.

Pre-war cars got a shot in the arm last year at Bonhams’ Frederiksen auction. In our 2016 predictions we posed the question – ” will pre-war cars grow in popularity”?

The answer from our perspective has been yes – we have seen a marked increase in interest in pre-war cars and we know that our pre-war dealer partners have had a busy year. Many of these cars look like great value at the moment and generally speaking owners are enthusiasts which means that prices are less likely to experience the peaks and troughs of the investor-driven sectors. 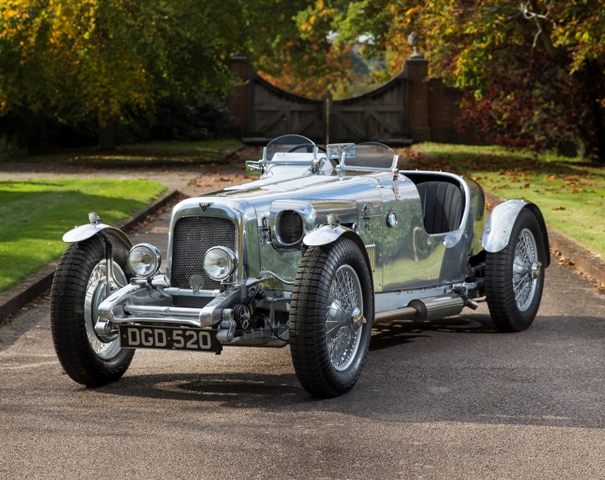 Buyers are looking for something a bit different. Whether that be an unusual marque or model, a car with an interesting history or even desirable enhancements the cars that stand out from the crowd are the cars that buyers want. As Jamie Knight of Bonhams mentioned in our Expert’s 2015 classic car market review, there are few classics now that aren’t readily available. “The choice has never been so great – expect the focus in 2016 to be on the the truly unique, whatever the marque.”

Enthusiasm for the classic car hobby continues to grow – estimated to be worth £5.5 billion in the UK alone – and passion for our motoring heritage remains undiminished as legions of new fans join the established enthusiasts. 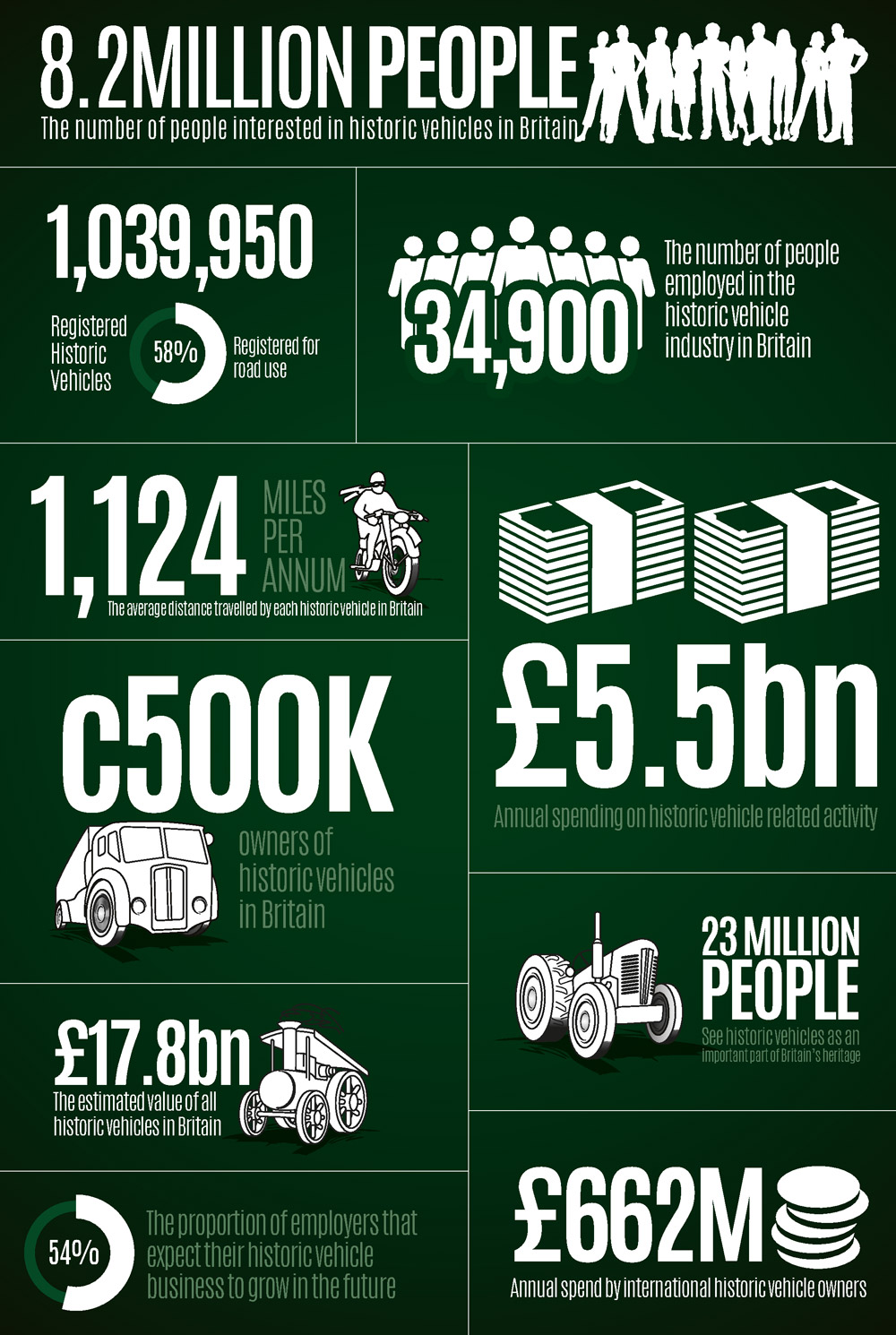 In 2015 sellers became prone to over-valuing their cars. In 2016 we have seem more sensible estimates at auction and fewer crazy showroom prices. According to Hagerty International, this has also been reflected in insured values this year.

At Classic & Sports Finance we saw “investor” interest peak in Q2 of 2015. While there is no doubt that classic cars have been recognised as an asset class or commodity  – and will remain so – media interest has cooled as the Knight Frank Wealth Report 2016 indicates that wine is coming to the fore as a the title contender for best performing alternative investment. Unfortunately the trouble about investing in wine is that you can’t enjoy it.

The first half of 2015 saw an enormous influx of LHD cars into the UK from Europe. This flow was stemmed as those cars began to pile up on forecourts and fail to hit auction estimates. Post-Brexit we are hearing reports that many of these cars are heading back home due to the weak Pound. This will have meant that some dealers will have had a good finish to the year.

Media pundits remain a powerful force in the classic car market which can affect buying patterns. Currently media organisations appear to be divided over their main focus in these area – how to make money out of classic cars. Our suggestion – go elsewhere for your advice (and don’t buy classics just to make money….).

One thing everyone seems to agree on is that good cars, correctly priced and available from the right source sell well. We have seen some amazing sales this year which eclipse many high profile auction results – we suspect that some dealers will begin to feel the pressure in 2017.

Find out what our expert panel think here.

One of the features of the market this year has been modern classics – some of them so modern that the term classic does not apply in the eyes of many. Low mileage, limited edition manual supercars are the order of the day. Cars like the Aston Martin DBS manual – which five years ago weren’t flavour of the month because of the stick shift. 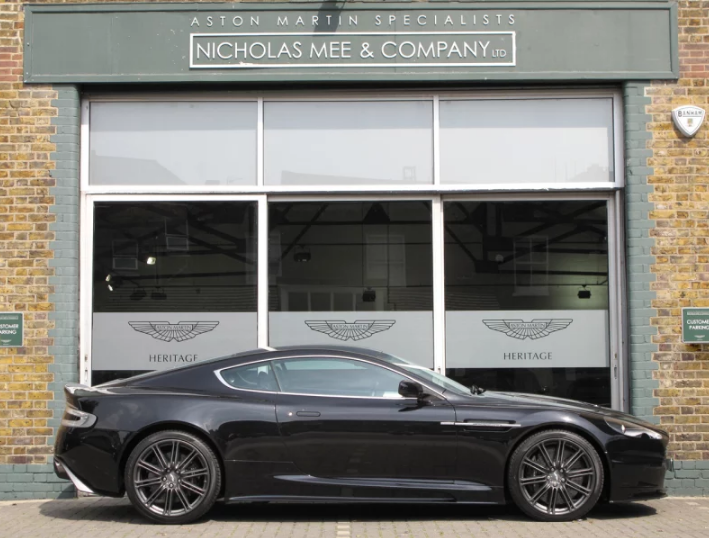 Sports cars from the noughties have arguably the best blend of reliability, usability, driveability, sex-appeal and political (and environmental) incorrectness of any sports car era. They are also good value right now – so get in while you can. How about a Lamborghini Murcielago or Ferrari 599 for a shade over £100,000 – or a Gallardo or 430 for even less. Porsche 997 Turbos are also looking like a steal.

The very latest limited production supercars – think Porsche 911R, Ferrari 458 Speciale and Lamborghini Aventador SV – have been the talk of the town this year with buyers paying significant premiums for cars. How long the premiums will last and at what level is anyone’s guess but if you are lucky enough to have taken delivery of one of these cars from the manufacturer then the potential for profit has been significant. For brave second owners and beyond wishing to flip cars for a profit the potential is unclear. Long-term enjoyment and ownership is almost certainly the best best but there is no doubt that the depreciation curve has shallowed and the half-life of premiums has got longer since 2010.

Forget the bubble – the balloon could spell danger

In 2016 we have seen a trend towards some customers accepting very large balloon payments at the end of finance agreements to keep the monthly payments as low as possible. Many finance providers are actively encouraging customers to do this as it can be more profitable – but the outcome is often far less favourable for the customer, particularly if they wish to settle early. If this trend continues it could have the potential to impact on the market if UK economic conditions take a downturn – remember the 1990’s?

“Pushing the limits of credibility” – the UK used car marketplace is correlated with the classic car market.

Another strong year in terms of volume, headlines and sheer marketing power for the auctions particularly in the UK affordable sector. “The new retail” is a phrase we keep hearing and auctions are fast becoming the new pop-up shops of the classic car hobby. Filling catalogues may present challenges to the auction houses in 2017 but we expect to see them increase their market share and continue to develop their offering through innovation. Buyers still prefer a dealer sale but the auctions are closing in.

We expect the sub-£100,000 market place to be vibrant in 2017 and we’re sure we’ll see some surprise auction results as buyers diversify and look for points of differentiation. Opportunities abound in this sector. Our tip – AMG. 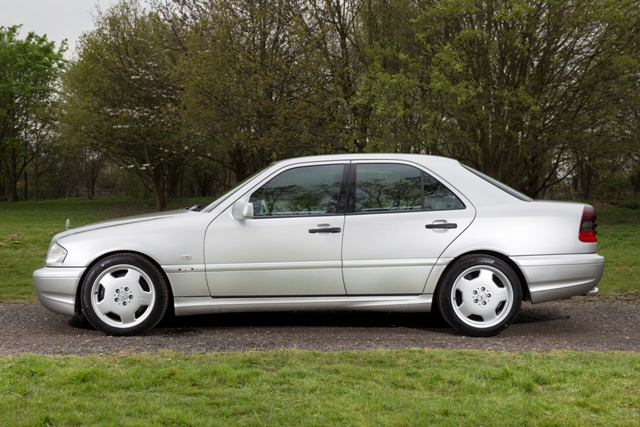 The Brexit vote seems to have had little impact on the classic car marketplace – in fact the US elections probably took more buyer’s eyes off the ball than the referendum. What will transpire in 2017? Will economic uncertainty have an impact? Will investors rush to buy tangible assets? What effect will exchange rates have? We see the 12 month outlook as stable – for classic cars at least.

Porsche will remain strong. Aston Martin will continue to flourish. The best Ferraris will continue to thrive – the rest may well find themselves back home on the continent. We tipped Maserati to gain last year and we are still waiting for it to happen. Land Rover is still enjoying strong interest. Mercedes increasing in popularity (and price).

We have seen a lot more enquiries and web activity from European buyers this year – post Duemila Ruote is it possible that the European market is wakening up?