The ROKiT F4 British Championship certified by FIA has entered a new era as the second-generation car was unveiled alongside the announcement of ROKiT as title partner of Britain’s FIA Formula 4 series at Bicester Heritage, UK.

2022 marks a dramatic shift in the dynamic of Britain’s FIA Formula 4 category, an internationally renowned entry-level category for the stars of tomorrow, including the adoption of the hugely successful Tatuus-Abarth chassis and engine combination.

That, combined with the introduction of Pirelli as the category’s tyre supplier, brings the championship in line with its contemporaries around Europe, as well as the rest of the FIA Single-Seater Pathway.

An audience comprising of team personnel, invited media, commercial partners, prospective entrants, and representatives from all levels of the sport – including Formula 1 – also witnessed the unveiling of the category’s new title sponsor, ROKiT in one of the striking hangars on the former RAF site, juxtaposing past, present, and future in a unique setting.

Already a renowned force in motorsport, the innovative brand’s decision to partner with British F4 is perfectly positioned with its philosophy of producing global-leading products in a number of different sectors, and their influence on the series will also help break down barriers for future competitors through the ROKiT Racing Star scheme. 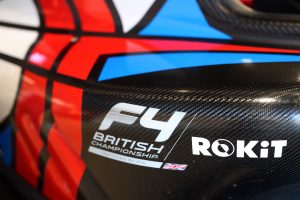 The car itself features a number of notable safety advancements, including the Halo cockpit protection device and strengthened side anti-intrusion panels. Motorsport UK has also sought to go above and beyond the mandatory changes with further safety features such as onboard signaling systems, with the aim of developing the safest FIA Formula 4 car worldwide.

Hugh Chambers, CEO of Motorsport UK:
“This is a really significant moment as the ROKiT F4 British Championship certified by FIA continues to build towards what will be a ground-breaking year in 2022.

As the entry-level step on the single-seater ladder, it’s absolutely crucial we put together a platform that gives competitors the best opportunity to make meaningful progress through the ranks. Many of these drivers will be aiming for Formula 1, so giving them a championship that allows them to start gathering relevant experience from their first laps in the car is a key element of what we’re building.

Our vision has always been to grow and develop the series into a global leader, and to kick things off with partnerships alongside the likes of ROKiT, McLaren and Pirelli really gives us a solid grounding on which to build and unveil further incentives in the near future. It also highlights how seriously British F4 is regarded at the highest echelons of the sport.” 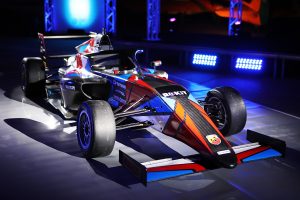 Karun Chandhok, ex-Formula 1 driver and Motorsport UK Board member:
“It’s incredibly impressive to see how far the latest chapter in British F4 has continued to develop in such a short space of time, and the unveiling of both the new car and some of the series’ commercial partners for 2022 is a really key step heading into the winter.

For aspiring single-seater drivers, this now has to be the go-to destination to start their journey on the FIA’s Single-Seater Pathway. What Motorsport UK have put together alongside the likes of ROKiT, McLaren, Pirelli, Tatuus and Abarth is going to make a real difference for drivers at a crucial stage in their development.”

Giovanni Delfino, CEO of Tatuus:
“Tatuus is delighted to work alongside the ROKiT F4 British Championship certified by FIA from 2022.

The UK has a long and rich history for motorsport, so it’s a fantastic market for our second-generation T-421 chassis to expand into, and we look forward to working closely with Motorsport UK, the teams and the drivers in the future to help establish the championship as a global leader in Formula 4 racing.”

Visit our Motorsports website Here and keep up to date with some exciting news that is coming very soon!

All Photos used are credited to Jakob Ebrey Photography.