Post-referendum media reports have erred towards the headline-friendly notion that Brexit has impacted the classic car market. Indeed, just as the schools are off and classic car owners retreat to their summer residences, one or two classic car dealers report that Brexit may be impacting on business.

We don’t see it that way. The majority of our dealer partners are positive about the market and the medium to long-term impact on it of the UK leaving the EU. Finance enquiries continue unabated and for those cynics that believe it is not in the interests of businesses such as ours to do anything but talk up the market, remember that 18 months ago we were reporting that certain areas of the market had plateaued….

Time will tell, but buyers are still buying – albeit there is shift in focus on the type of car – and purchase prices remain stable. We may see limited corrections in advertised prices over the coming months – take a look at the HAGI figures below – but those waiting for a correction back to pre-credit crunch prices are probably going to need to buy a De Lorean. Don’t wait too long thought, because prices of those are likely to rise…..

Our index is based on invoice prices, enquiries and customer sentiment.

Speculators have dwindled further while experienced buyers are as active as can be expected during the summer holidays – traditionally a quiet time in the market. Enquiry levels are normal for the time of year. Some dealers are reporting that trading conditions have become slightly more challenging post-Brexit while others report a surge in enquiries, particularly from overseas. We suspect the reality is that the upturn in the weather and summer holidays are playing a bigger part in any trading challenges than any political or economic factors. The best cars remain sought after and prices strong.

Hagerty’s US market rating increased in July 2016 for the reasons they give below:

For the first time in four months, the Hagerty Market Rating saw a sizable increase. At 69.07, July’s rating is up 0.17 points from last month.
Auction activity saw the biggest positive movement of any section this month and is at its highest since December 2015. The number of cars sold is up 2 percent over last month and the average sale price is up 1.8 percent.
After its third consecutive drop last month, private sales activity increased, largely driven by an increase in the number of cars selling for above their insured values.
Despite these increases, requests for insured value increases for broad market vehicles fell for the tenth consecutive month and are at a 26-month low.
Insured value increases for high-end vehicles also decreased. This is their third consecutive drop and they are at a 17-month low.
Correlated instruments saw the most negative movement of any section this month, as the price of gold spiked to its highest level since February 2014 during the aftermath of Brexit.
June’s reported rating was revised to 68.90 from 69.01 due to newly released inflation numbers. 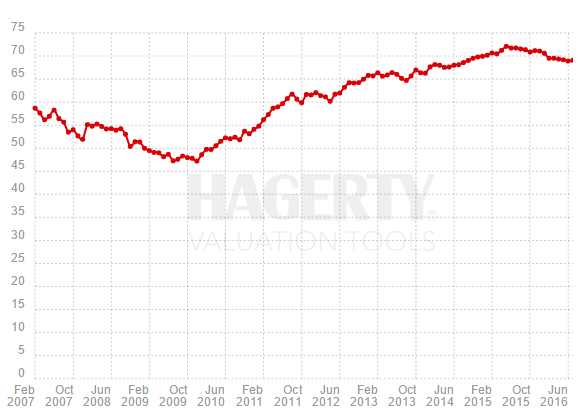 The HAGI Index reported increases in their TOP 50 Collector Cars Index of around 0.74% in June – a total increase of 1.81% YTD.

Unusually for HAGI, they provided no market commentary for the figures.

The K500 market average index stands at 477.1 from an opening position on 1 December 2014 of 449.9 – a slight drop from last quarter but a static market overall. Notably, Affordable Classics have advanced.

Many thanks are due to Hagerty Insurance UK and HAGI for their support and cooperation in allowing us to share their data.