Porsche continue to tease with 911 Speedster Concept at Goodwood

It looks like Porsche will build the 911 Speedster they've been teasing us with, but how many, and when?

Back in June Porsche teased the world with a video of a fantastic looking 911 Speedster concept. The original press release said that it was a gift from Porsche to Porsche:

However, as time has gone by, it would appear that that this car is in fact a gift from Porsche to a few lucky customers – it looks like a low volume production run is coming.

Rumour has it that Porsche will build 1,948 units to coincide with Porsche’s 70th anniversary celebrations. That would mean in terms of production numbers the 991 Speedster would follow the original 1989 Speedster, of which just over 2,100 were made. There were 934 examples of the Porsche 964 Speedster and just 356 of the more recent 2011 997 Speedster.

How much will the 2018 Porsche Speedster cost?

Prices and availability are yet to be announced but we’d expect this to fall north of £150,000.

We’ll take ours in dark grey metallic with the tan leather and no decals, please…

Here it is at Goodwood Festival of Speed: 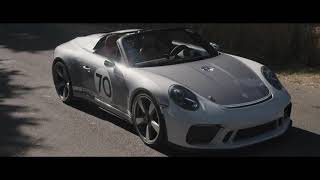