Porsche made the very last air cooled, turbo charged Porsche back in 1998... 20 years later, they made one more

Porsche follows the trend of digging into the archives for inspiration – meet Porsche Project Gold.

The heritage division at Porsche, known as Porsche Classic, have been quietly working on Project Gold for the last 18 months.

Built from an original 993 body shell, the new car uses all new parts and is officially a ‘track only’ special. It uses the same 3.6 litre flat six turbocharged engine that powered the original 993 Turbo S.

Porsche has teased videos showcasing the craftsmanship and expertise that have gone into the making of Project Gold. By using modern technology, Porsche has been able to create the ultimate 993 in every detail.

“Project Gold showcases the comprehensive skill of Porsche Classic in fascinating fashion,” says Detlev von Platen, Member of the Executive Board of Porsche AG responsible for Sales and Marketing. “This project clearly demonstrates our strategic approach. Although we are starting a new chapter in our sports car history with the Porsche Taycan, the story of how the company evolved is no less significant. On the contrary, this Golden Yellow show car based on the 993 shows how incredibly passionate we are about the tradition of our brand.”

The finished car will enjoy an official premiere at Laguna Seca, California in October.

After the unveiling the car will head to RM Sotheby’s Porsche 70th anniversary sale where it will be sold to the highest bidder.

All proceeds from the sale of “Project Gold” will go to the Ferry Porsche Foundation. This non-profit organisation is dedicated to education, social issues, and youth development, a charity established in 2018 to mark the “70 years of Porsche sports cars” celebrations.

Porsche Project Gold – Built to be the Gold Standard in Porsche

In recent years there have been numerous outfits offering ‘brand new old’ Porsche recreations. Is this Porsche celebrating their 70th in style? Or is it the brand saying ‘we can play this game too’.

Are we going to see more of these limited run new old cars? We certainly hope so.

Read the original description on the auction page here. 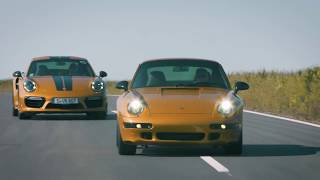 Project Gold – One and only.