Another great Fullbore issue from our long-term partner Nicholas Mee & Co; here are our thoughts on the Aston Martin market at the end of 2017. 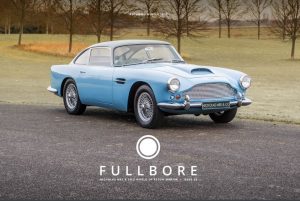 It was Rob Johnson of NM&Co’s long-term partners Classic & Sports Finance that summed up a significant factor in today’s collectors’ car market: “Clients are saying to me that they have five or six really nice cars, but they would quite like one ’to refine the collection into less, but more special cars.” Nick concurred. “We’re seeing more part-exchanges than outright cash purchases. Owners are refining their garages so that they can trade up whilst the cash differences are low. It’s good for those new to the market, as they have the opportunity of buying well-cared-for cars from genuine enthusiast owners.”

Rob, Nick, Neal, Ed and myself were gathered round the boardroom table at the Brackenbury House. It was annual Market Review time, an opportunity for everyone to have his say and, as usual, no one held back.

First off was a general discourse on the state of the market. ‘Stable’ best describes it, and as Neal put it most succinctly, “No one is under any illusion now that buying a classic car is a one-way trip to dramatic short-term profit. As a result, we’re seeing enthusiasts coming back to the market who appreciate the cars as fine-driving works of art, with good potential for medium to long-term financial appreciation.

“They are younger too, and internet savvy, the ‘generation of the forums’, if you like,” he added. Ed agreed: “We’re seeing more focus on the later cars rather than the established hero models of the 1960s. There’s a new breed entering the market and they want their own hero cars from the 80s and 90s.”

“Now prices have stabilised, the real enthusiast isback in play. They want originality and a car they really can use,” said Rob. “And unlike Ferrari, the premium market for new limited-edition Aston Martins, trading way above list prices has never really taken off, so there’s little fall-out from a softening trend, and that can only be a good thing.” 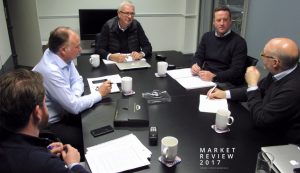 Nick agreed (and he’s observed the ebbs and flows of the business far longer than most). “The Aston Market of every era car is steadier, compared with Ferrari and Porsche. It’s not prone to the same peaks and troughs of the premium market for the latest model, it’s a steadier market and perhaps a reflection of the buyer profile.” And Aston owners – congratulate yourselves here – maintain their cars better. “A buyer of a modern Aston Martin will look after his car, there’s no doubt about that,” said Ed. “We are always very careful with the cars we offer, most we see come from a good home and if not, it’s not for us. It’s reassuring for new buyers to realise that.”

Finally, speaking generally, all were agreed that the recent cars from Gaydon, now over 10 years old, are no more ‘complicated’ than a modern BMW or Mercedes. The hi-tech hybrid supercars coming through will prove a challenge, but a DB9, DBS or new Vanquish is straightforward to work on,which is a big plus when considering future values. But back to the classics and, era by era, what’s been happening in 2017 and how do things look for the New Year? The perennial story of Feltham cars being ‘undervalued’, ‘good value’ and ‘underrated’ – particularly compared with the equivalent Ferrari – carries on. In the summer edition of FullBore, Neal and I drove a DB Mk III and we both really enjoyed it. When the plethora of ‘barn-finds’ bought at auction come out of expensive restorations, owners are going to wanttop-dollar for them. Which bodes well for future values, especially in the long term.

The classic DBs, the 4s, 5s and 6s from Newport Pagnell, are likewise fairly static, with few good cars coming to the market. “These are ‘special occasion cars’, something a successful businessman might buy for himself, to celebrate the sale of his company,” said Rob. “But owners of DB5s and DB6 Volantes are keeping them,” noted Neal. “DBs might not be selling with big premiums right now, but those who bought them five or so years ago are sitting pretty. They’ve got a lovely car that’s been earning more for them, even after running costs, than money in a bank account.” And there are very few distress sales, according to Rob – people are simply holding onto the cars.

As far as William Towns’ V8s are concerned, the V8 Vantage remains ‘the one to have’. So much so that values of non-Vantages are looking attractive. “They are good to drive, some would say better in many ways than a raw Vantage, certainly every day, and appeal right across the age spectrum of buyers. Park a late-model V8 in Mayfair or Chelsea and watch well-heeled bystanders of all ages and sexes stop and stare,” said Nick. “They are cars to buy today but, again, few ownersare selling,” he added. “The ‘Vantage premium’ is substantial now, it makes the regular cars look very affordable.”

In this same room 12 months ago ‘the one to watch’ was the supercharged Vantage. Twelve months on, the team reports that interest in them has certainly hotted up, with the V600s and Le Mans (of which only 40 were built) at the top of the tree. “They are 90s supercars,” said Nick. “Look at how a dotcom billionaire hoovered up the low-production special Porsches at RM’s London auction last year. Or think about Ferrari’s 288 GTO (£2.2m, 272 built) and F40 (£1.1m, 1,315 built).” If anything ticks the box marked ‘generational shift’, it’s the Vantage 550s, V600s and Le Mans. Not so far removed, but better bracketed as ‘its day is coming’, is the V8 Vantage Zagato. “These cars should be valued at a multiple of a regular X Pack V8 Vantage,” said Nick. “They may appear quirky but that’s irrelevant, they are extreme and built in small numbers. Right now, they’re interesting.” And so to Newport Pagnell’s last hurrah, the mighty Vanquish. Ed is a fan: “In ten to fifteen years’ time these will be appreciated as a real classic marking a shift in AM’s fortunes.” “You’ve got to maintain them. If any car warrants a bulging history file, a Vanquish is it,” said Neal, adding a note of caution.

On the New Era front, Aston Martin’s global expansion can only be good for the brand. A major new dealer in Japan, its largest in the world, helping spread the word, boosting interest in the famous winged-badge, in overseas markets. Aston had just launched three new Zagato versions of the Vanquish and Neal felt that would stimulate an interest in the V8, DB7 and V12 special-editions: “We’re looking forward to one day having them in our newly located showrooms.”

So, come on guys, crystal ball time, what’s going to be hot in 10 years’ time?

Ed Barton-Hilton: “Newport Pagnell Vanquish. I’m surprised they have not taken off further, time will inevitably see them rise.”

Neal Garrard: “A Vantage Le Mans. £400k+ today and surely a £1million Aston in the future.”

Rob Johnson: “I’ll go with Ed on the Vanquish. Underrated, incredible presence and hard to find a good one. There won’t be many good ones to choose from in years to come”

Nicholas Mee: “There seems little doubt the DB9 GT will ultimately be a good investment, as the ‘last of line’ of the most significant and successful product from Aston Martin’s 104 years.” For me, it would have to be an early, ‘bolt-on’ V8 Vantage, perhaps with a 6.3 conversion.

But over to Nick for the final word: “First off, when asked about ‘investment’, we always recommend clients to take the long-term view, five to ten years or so. Look back to 2007 and you will see how values have risen way ahead most other investments, even if there has been some ‘cooling down’ over the last 24 months from the sharp rises of 2012-15. Away from equities – on a roll today, but with risks attached – and with money deposit rates still at all-time lows, it’s as good as anywhere to park money and get a return, all the while enjoying the multi-dimensional experience that is driving a classic. Historically there’s a strong case for cars, particularly over the medium-term and of course, zero tax consideration on any up-side. “And as to where we came in, activity this year has been steadier, with marque enthusiasts preferring to refine and reduce their collections, trading in and up to the better cars. Market commentators speak about a ‘flight to quality’ – I call it ‘finessing’. That means more trade-ins for us and means new buyers can find outstanding cars once owned by the really enthusiastic collectors.

“But enough of all this; never forget the reason why we all love these cars and why we bought them – they are great to drive, beautiful to look at and give automatic access to an interesting lifestyle. So get out there and enjoy the experience!