The ultimate version of the discontinued Defender?

The SVX has been lurking in Harry’s Garage for a little while – it was there on our last visit but Harry’s lips were tightly sealed about where it had come from and who owned it.

Designed and built for a winter “event” in the Austrian Alps Harry leaves enough clues for us to guess just what that event might have been without too much difficulty but the really important detail lies in the specification of this rather special Land Rover.

One of only ten built, it features engine and suspension upgrades by Bowler Motorsport – famous for the Land Rover based Wildcat and Nemesis off-road racers. Most impressive of these is the suspension setup which allows the vehicles to make very rapid progress off-road but proves to be a little noisy on the blacktop. 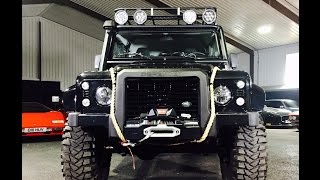 With a host of additional features and upgrades this is a Land Rover that will go down in history as one of the most memorable Defenders ever made – we don’t think that Land Rover have produced anything similar since the “Tomb Raider” in 2000 (pictured above).

Classic & Sports Finance are proud sponsors of Harry’s Garage. If you would like to finance a specialist vehicle like the Defender SVX Concept please get in touch on 01869 351 512.

Post script: We were saddened to learn of the passing of Drew Bowler – founder of Bowler Offroad in November 2016. Our thoughts are with his family and friends.