Goodwood Members Meeting – the best event of the year? #75MM

The Members Meeting isn't just for GRRC Members - and it serves up most of the best of Goodwood without the crowds.... 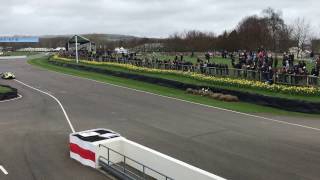 Even a decade ago the Festival Of Speed and Revival were busy places but in recent years the crowds have become one of the main features – as have the traffic jams trying to get in and out of pretty much the whole of West Sussex.

The crowds are an inevitable consequence of Goodwood putting together two world-beating events, but if you yearn for the more informal and more relaxed early days of FOS and Revival then the Goodwood Members Meeting is for you.

Held yearly in March, the #MM aims to recreate the atmosphere and camaraderie of the original BARC Members’ Meetings held at Goodwood throughout the 1950s and 1960s. It’s really for members of the GRRC (Goodwood Road Racing Club) but Lord March doesn’t want you all to miss out on a truly exceptional event so there are a limited number of tickets available to the general public (thanks to the team at JD Classics for inviting us). Not unlike membership of the GRRC, the exact numbers aren’t known but we suspect that the numbers of both will continue to swell over the coming years.

The format is very much like Revival but is much more focused on the racing and less on off-track theatre. In addition, modern cars are allowed into the circuit and on the race track. It’s access all areas including the paddock and the racing this year was truly spectacular. If you like to watch 60’s Le Mans Cars, 70’s and eighties saloon cars, Edwardian racers and GT1 cars giving it some welly then this is the event for you. Just like Revival, the racing is no holds barred and could reasonably claim to be some of the best motorsport action anywhere in the world.

It’s not just racing either – Bonhams are present to tempt you with one of their well-organised Goodwood auctions and cars and motoring merchandise are available to buy from a selection of specialists. As is typical at the Goodwood estate, you’ll see cars that you have never seen before and even the car park is an event in itself.

MM’s atmosphere is relaxed and laid back, the crowds are thin and the traffic is non-existent compared to it’s larger siblings. We’d recommend it whole heartedly – as an event it is top priority – but you’ll need to be on the ball to get tickets if you aren’t a GRRC member.