Motor racing is a core element of the business activity that the company is involved in and are market leaders in providing funding for a variety of race cars, from pre-war and vintage to modern GT cars, in addition to race transporters, tractor units, pit and garage equipment. This year Classic & Sports Finance are once again proud and excited, for the third year running, to be co-sponsoring the Equipe GTS. A series designed for the more mature historic race car driver where being a gentleman driver with an edge for competitiveness is paramount.

The Equipe is designed for FIA designated pre-1966 GT drivers boasting a mixed and exciting grid of GT and GTS cars up to 2700cc. To add to this, the company is delighted to be invited as the secondary sponsor of the inaugural Equipe GTS Pre 63 Series which opens the grid to a wider and more powerful selection of racing machines. If you are looking to get into the seat as a gentleman driver in a historic and friendly environment, then this is for you. Don’t think this is “delicate” racing as it is most certainly not but is a modest way of entering historic racing and building your race experience with like minded drivers of all levels of competence.

Racing has been a part of Rob’s life from the early days of his father competing a Lotus Eleven as a privateer, so it was a natural progression, being so embedded in the industry as we are, to campaign our own small but enthusiastic race team. This has enabled us to join our clients, dealers and friends from the industry in the wonderful world of historic racing. As we enter the teams fifth year I am delighted for the second year running to be racing with the CSF team as I too am from historic racing stock and felt it time I continued the tradition of making my family stand out in all-weather to get a ten second glimpse of me as I pass the pit straight once every 3 minutes! As a team, we are gratefully supported by Oselli Motorsport  who have been outstanding in ensuring our development. Team manager Paul Eales has always been an inspiration and worked relentlessly to keep us in motion. This year we are entering the season with a brand new freshly built Oselli 1840cc engine for the MGB and the addition of a 1962 Triumph TR4 which although in the same race will run in a different class. 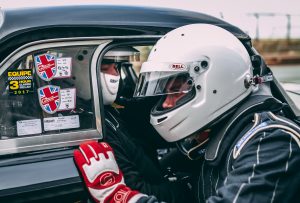 Rob is now in his fifth season campaigning an MGB and this year, he’s up for the fight. We enjoy paddock life as much as the racing but having spent the last few seasons relishing a lovely time, we are now ready to take a more serious place on the grid.  As we go to press with this first Racing Report of the season we have already completed the first race of the year at Silverstone on the National circuit. The beginning of any race season with a new engine or new car can be interesting to say the least so we are naturally pleased to get through the first race intact and placed midfield.

Now, one thing that is still quite rare in historic motorsport at this level is a woman driver. Undoubtedly at some series meets there are enthusiastic female racers who, to be quite honest, drive some hefty and expensive cars. I have always been in awe of the female owners of cars such as WO Bentleys and historic Formula 1 cars who consistently keep the boys under pressure at club and national event meetings. In our own series we rarely see more than one or two women drivers throughout the year (generally seasoned) and feel that this is … well a little weak. Maybe historic racing is just one of those male dominated environments and I suspect it is just a mobile version of a domestic mancave where the girlfriend or wife just doesn’t get invited in. Whatever the case, we felt that this year we would try and make a difference just to see how easy or hard it maybe for a female driver to start from no experience, obtain her MSA license and learn to drive old cars with generally old men! We intend to take their own company secretary, Hilal Johnson, through a journey as a novice through some professional coaching, her ARDS tests and hopefully her MSA License. Through this journey we are looking for an insight into the process of how a novice can enter historic motor racing, the processes, challenges and cost for a new driver and a female one at that, to join the grid. Our objective is to see her enter a race in our series by the end of the year, sounds easy? We shall see!

Our series is open to everyone to see and all are welcome to come and spend the day with us at race meetings. Being around race cars and the paddock scene is fascinating and exciting and as the year progresses we will report on our meetings. For tickets to the any of our events please call and speak to Rob or one of the team where you will be most welcome. Brands Hatch is this weekend with a full grid over two days so come and see us!

How to start motor racing: ARDS:  A licence to thrill?