Everything you need to see at the Geneva Motor Show, 2017 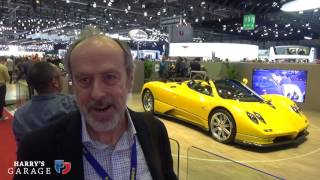 This year’s Geneva Motor Show is one of the best for a while in terms of sheer numbers of new cars and first public viewings and Mr Metcalfe is just the man to give you a guided tour. His experience, knowledge and contacts make for a much more contemporary and interesting view on the in-and-outs of the automotive world than your average motoring hack is able to deliver so sit back, relax, enjoy and learn.

Reduced weight, a few extra BHP and a blistering (and disputed) ‘Ring record were the big story for many. We liked the new active aero system that directs split air flow over a fixed wing creating different levels of downforce on each side to improve handling.

Not much of a secret – Porsche dealers let the cat out of the bag months ago – but the new GT3 will inherit the manual transmission and 4.0 litre engine from the 911R. Starting from £111,000 in the UK, 911 R premiums will no doubt come under the spotlight.

A marque that any classic car enthusiast will cherish brings a Cayman rival to the market.

2017 has been the first year in a while that the Classic & Sports Finance team has been unable to attend – thanks to Ferrari, Koenigsegg and Spyker amongst others for making this possible in previous years (we’re free next year…).

RT @Motor_Sport: The F1 season review wraps up with the future of the sport as car manufacturers focus on electric vehicles. “F1 is at a c…