does the Handling Speciale package work on UK roads?

In this episode of Harry’s Garage, Harry Metcalfe takes a look at the Ferrari California T:

The biggest disappointment about the new Ferrari California T “Handling Speciale” is that it doesn’t have a better name. Quite why the Italians chose to stick with Handling rather than the Italian “Mannegio” we have no idea. Might we suggest Equilibrio (balance) Speciale instead?

The great thing about Harry Metcalfe’s video reviews is that they are honest & balanced. If you are a manufacturer and you want him to review a car, don’t expect the grateful reverence of the new generation of YouTubers. EVO magazine gave the original 2008 California “a bit of a kicking” when it was first launched so how much has the newer car changed?

“GT3 hard” suspension, a “TVR quick” steering rack and “grumpier” exhaust all add up to a pretty hardcore GT car in Harry’s eyes. Power is up 100 hp with 50% more torque than the previous car which all adds up to a massive performance difference despite it’s 1750 KG wet weight. 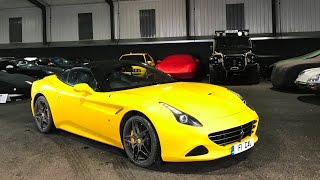