For the second year running, a new course record has been set with a time of 38.86 seconds.

As the sun beat down on one of the hottest weekends of the year, the Chateau Impney Hill Climb 2018 returned on the 7th and 8th of July for the fourth consecutive year. Crowds basked in the sunshine as the vast array of cars hurtled their way up the course.

Malcolm Thorne in his speedy Lotus 35 F2 of Class 17 took the Fastest Time of the Day, managing a blistering 38.86 seconds. This also sets a new course record, shaving almost half a second off the time set in 2017. 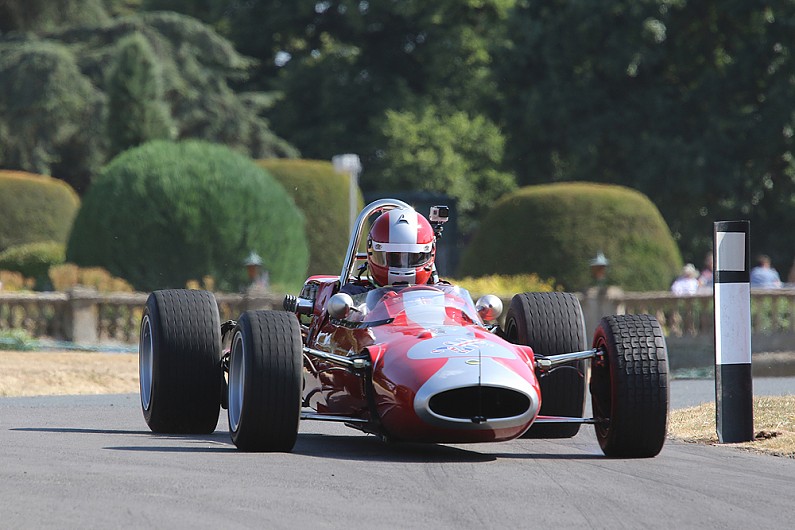 Second and third place was taken by Martin Jones in a Brabham BT 21B and Justin Maeers in a Lola T70 MKII with times of 39.95 and 41.38 seconds respectively. The competition for the top places was fought determinedly, and the drivers made sure to push the cars to their limits.

Austin Twin Cams and Side Valve were not only present at the event, but also ran together for the first time in over 30 years.

The Chateau Impney Hill Climb 2018 is always fortunate to host some of the rarest cars in the world and this year was no different. Working closely with the National Motor Museum in Beaulieu, we were delighted that the Austin Twin Cams and Side Valve were not only present at the event, but also ran together for the first time in over 30 years.

“Once again, I am delighted at the event that our team have been able to put on. The overwhelmingly positive response it has received has repeatedly highlighted how friendly and welcoming the Hill Climb is.

The event has taken a giant leap forward in 2018 in terms of variety and content. Many of our visitors have commented on how the event exceeded their expectations. We are now focusing on ensuring that 2019 offers a similar step forward whilst remaining an event with a soul, one giant summer party.” Rod Spollon, Event Director.

In total, over 200 drivers took part in the event, split across 18 classes.

We would like to congratulate all our drivers on an excellent weekend of driving.

We were also proud to host the Michelin Supercar Expo for the first time. These magnificent machines were on display over the weekend for the public to get up close to. Some of the highlights included a Bugatti Veyron Supersports, a Koenigsegg Agera, and a Ferrari Enzo. We were also lucky enough to see twenty-five of these vehicles driving up the course at lunchtime.

The second stage of the Ralli 22 series was the latest addition to the competition at Chateau Impney. This was very well received by the visiting public. David Wright won this stage of the competition with a time of 42.08 seconds in the ex- Carlos Sainz Ford Focus. During the break for lunch, we were once again treated to some spectacular demonstration runs from a fantastic and unrivalled display of cars. The famous V16 BRM once driven by

Manuel Fangio and Stirling Moss joined us again, running alongside the Red Mist dragster, a Nissan GT1 and a selection of historic bikes from the Brooklands Museum.

The Footman James Concours d’Elegance is always a favourite attraction for the public, and the addition of the theme only added to this. Focusing on the Best of British cars, the public could vote for their favourite of five marques – Jaguar, Bentley, Aston Martin, Lotus and Morgan. Featuring an old and new car from each marque, Aston Martin claimed victory with the 1955 Aston Martin DB 2/4 MKI and 2008 Aston Martin DBS Coupe.

The Chateau Impney Hill Climb is always thrilled to work with the RAF on the Battle of Britain Memorial Flights and this year was no exception. We were lucky enough to receive flypasts from both a Dakota C-47 and a Hurricane over the weekend to delight the public. Swooping low over the countryside, both planes were a stunning sight against the backdrop of the Chateau.

The weekend is truly an excellent family day out, and the glorious sunshine made this the perfect weekend. The event catered for every lifestyle, with the addition of cookery demonstrations and a trade village featuring luxury brands. Visitors could also test out Gtech e-bikes, or plough through the undergrowth in the tank experience.

See you next year!

Want to take part next year? Try our Dealer Stock pages for eligible cars for sale.