Does the BMW E30 M3 live up to the hype? Harry finds out.

As a previous owner, Harry Metcalfe knows a thing or two about the BMW E30 M3.

The E30 M3 is arguably the most iconic model that BMW has ever produced. Conceived as part of a 5,000 car homologation run homologation between 1985 – 1992 to enable BMW to compete in 80’s touring car championships (think BTCC, DTM, WTCC etc.), the E30 M3 went on to sell around 16,000 units. While that might sound like a lot, it still makes it a pretty low volume car – Ferrari produced nearly 9,000 Testarossas. As the requirements of BMW’s motorsport customers developed, BMW had to make the car more competitive and Evo 1, Evo 2, and Sport Evolution road versions followed to keep the improved race cars homologated.

The M3 might have looked similar to the standard 3 Series, but as Harry explains in the video there were substantial differences in the bodywork, brakes, suspension and driveline. Competing in the marketplace with cars such as the Lancia Delta Integrale and Sierra Cosworth the E30 weighed in at a substantial £28,000 compared to around £21,000 for its rivals. The ergonomics and build quality were fantastic as anyone of a certain age will be able to tell you.

The M3 had a 2.3 or 2.5-litre 4-cylinder engine (with even the most powerful models producing only 235 bhp) and a dog-leg gearbox. Harry notes that the car has a fine ride but is lacking in power and torque compared to modern cars and even some of its rivals in period.

In recent years we have seen asking prices rise from the mid-teens to six figure sums for some variants. But does the car really justify that sort of expenditure?

The Porsche 968 Club Sport debuted in 1992 at a fraction under £30,000 – a different type of car and fewer 968s were built but it lacked the global motorsport success of the M3. We’ll let you be the judge of which should be worth more now…. 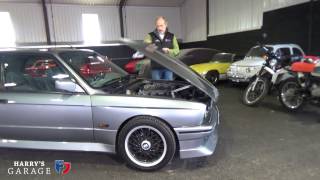