Is the DB9's successor as good as we all hoped?

The now ageing DB9 is a great looking car, a competent GT and a great value buy as a future classic but you could argue that  it doesn’t really pass muster in the face of some serious competition after nearly 14 years in production.

The DB11 is a new departure for Aston Martin – it is the first turbo-charged production Aston Martin and also the first Aston to benefit from their collaboration with Mercedes-Benz who will provide engines and other hardware and electrical systems. The current engine in the DB11 isn’t a Mercedes unit, though – yet.

Striking Aston Martin design is available in abundance in the new car – which may yet prove to be a stumbling block for the “normally-aspirated” traditionalists but there is no doubt that the car draws the eye. We have seen a number on local roads and parked at the office – located as we are in Motorsport Valley – and it really does look and sound fantastic.

We’ll let Harry do the talking, but suffice to say that this is the most informative (and enjoyable) DB11 review we have seen. 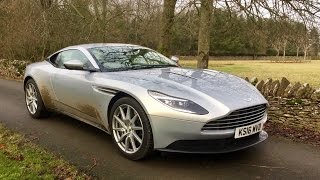