2k miles in a Testarossa

Harry takes a 2000 mile round trip in his Ferrari Testarossa

The next time someone tells you that supercars aren’t practical get them to watch this video.

Never one to shy away from a challenge or putting a few miles on his cars, Harry decides that his Ferrari Testarossa is the right car to transport two bikes to the French Riviera and make the return journey with an outboard engine – definitely a gamble given the size of the engine!

“As it turns out, Testarossas basically do not work in the winter.”

In addition to his load-carrying challenge, the Testarossa’s heating system goes kaputt and Harry is forced to find a novel fix for the problem to combat the sub-zero temperatures of northern France. 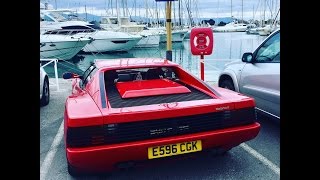