The original Land Rover first arrived in showrooms, on our roads and in our fields in 1947. Maurice Wilks light agricultural utility vehicle was a roading success, and over the last 70 years the design has become an icon in it’s own right, a symbol of dependability and a British icon recognisable worldwide.

From 1947 the Land Rover Series 1 used a 1.6 litre engine, upgraded to the larger 2.0 litre from 1952 onwards. In 1950 the headlights moved from behind the grill to protrude through the grill, and later changed again so the grill formed an upside down T shape around the position of the lights.

This example offered by Williams Classics is a 1951 80 inch model. It comes complete with heritage certificate, original number plate ‘LND898’ and an original ‘Lloyd, Excavations & Roadstone Ltd’ plaque fitted to the wing – this company used the vehicle in the 1960’s.

LND898 boasts a recent restoration, with most original components reconditioned. Parts that were found to be beyond repair have been replaced by original Land Rover new-old stock components.

New wings were provided by Keith Wadsworth, along with door taps, tailgate and more.

The rear rub shows no signs of hard use and features rear bench seats. The bulkhead is original and solid showing only a few areas of light pitting. The chassis has been restored to immaculate condition, while any outriggers that needed replacing have been. The vehicle is now fitted with full set of correct sheradised body fixings as per original specification.

It is finished in the correct tone of Bronze Green, with the underside of the bonnet unpainted and in bare aluminium – exactly the way it would have left the factory.

Inside the correct square back type front seats and matching rear seats were supplied by renowned specialists Sam’s Trim. The Land Rover also had new canvas and flaps from Undercover Covers – no expense has been spared on this Land Rover with thousands of pounds of receipts for parts present in the vehicles history file.

The load area, like the rear tub, shows very little signs of heavy use. It seems this Land Rover was blessed with a relatively easy life, unlike many that we have seen in the past.

LND898 is powered by it’s original 1600cc 4 cylinder engine, with a modern ignition coil and refurbished carburettor. A new worm and nut means the steering is positive wit no backlash, and a recent service completes the mechanical picture of this exceptional Landy.

We are told this Land Rover is a ‘joy to drive’, with permanent four wheel drive and all gears working as they should. It is reputed to leak no oil – how many classic Land Rovers can say that?

LND898 is complete with a set of 5 matching Extra Traction tyres with less than 500 miles to their name. These are cross ply style, giving the old girl the perfect aesthetic.

Having covered less than 500 miles since the restoration, this is a great opportunity to buy an early Series 1 Land Rover.

Early Land Rovers have been climbing in price in recent years, with the very best examples regularly changing hands for north of £45,000.

Unsure if a Series 1 Land Rover is for you? Harry Metcalfe has some great advice: 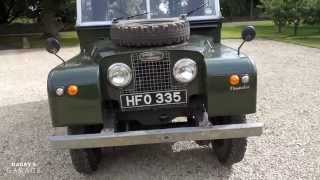 “Overall this is a very honest almost 70 year old Land Rover. It looks and drives as it should. A rare opportunity to acquire an exceptionally restored and very desirable 1951 Land Rover Series 1 80″

“The popularity of a basic Land Rover has exploded in recent years, with buyers searching out the simplicity and purity of design that an old Landie can offer. As modern cars get more advanced, people love the noisy, bumpy, slow experience that an early Land Rover provides. There’s a rural charm with these things – it’s impossible not to smile when you’re behind the wheel of a classic Land Rover”

RT @Motor_Sport: The F1 season review wraps up with the future of the sport as car manufacturers focus on electric vehicles. “F1 is at a c…